How were objectors treated in New Zealand?

The policy implemented in which the objectors were treated by was extremely harsh with victims suffering brutal acts affecting them all physically, mentally and emotionally.

The grounds of the Wanganui Detention Barracks were often nicknamed the ‘slaughter yard’ with evidence of blood splatters displayed throughout the yard. Those who refused to co-operate were pushed, pulled, kicked and...
Published in Disobedience and Rebellion of Soldiers and the Treatment of Conscientious Objectors in the First World War in France and New Zealand – a comparative historical study. La désobéissance et la rébellion des soldats et le traitement des objecteurs de con
Read more...
Thursday, 28 August 2014 00:00

Anti-Conscription During World War One

What actions were undertaken by those involved in the movements against conscription of men as soldiers?

Religious objectors would not serve in the Army Service Unit or Medical Corps during the war while refusing to wear uniforms for non-combatant roles. 73 conscientious objectors had been exempted for religious reasons but in Trentham Military Camp, 15 religious objectors refused to do any work or wear uniforms. They were...
Published in Disobedience and Rebellion of Soldiers and the Treatment of Conscientious Objectors in the First World War in France and New Zealand – a comparative historical study. La désobéissance et la rébellion des soldats et le traitement des objecteurs de con
Read more...
Thursday, 21 August 2014 00:00

How were the conscientious objectors treated in NZ and France?

Conscientious objectors in New Zealand were first sent to prison camps or were forced into hard labour as sentences for refusing to fight or responding to...

It’s been around 3 weeks since we returned from the Young Ambassadors Tour, and the hectically busy life of school has been a bit of a shock after such an amazing trip.

I updated my Tumblr blog for every day of our trip, and all the entries can be found on the following link: http://ailishjean.tumblr.com/tagged/ya_tour

I can honestly say that the two weeks we spent away were the best weeks of my life- I learnt so much about the war, and I made a new family in the other Young Ambassadors. The...

The Passive Resistance in New Zealand, prior to the outbreak of War.

As part of our Shared Histories programme this year, our group will be researching the passive resistance in New Zealand prior to the outbreak of the War.

In this we will be researching significant groups in New Zealand which opposed the compulsory military training that was imposed upon the New Zealand working class by the government. The two main groups we researched are the Socialists and Christians.

The workers from the groups who opposed military training were often subjected...

Over the last week the two Year 12 History classes at Baradene College have each visited the first exhibition to mark the 100th anniversary of the First World War at the Auckland War Memorial Museum in Auckland, New Zealand. This very good exhibition ‘Entangled Islands: Sāmoa, New Zealand and the First World War’ looks at the New Zealand invasion of German Sāmoa which took place on 29 August 1914. This event would entangle New Zealand and Sāmoa together and have a lasting impact on the cultures...

I guess now that I am home and rested I should update my blog!

First off I want to make a half apology for not updating whilst I was actually in France. I along with the rest of the Young Ambassadors was preoccupied with the wonderful sights and sensations that France and Belgium offered us.  I had an incredibly amazing time and really want to thank everyone who supported me in getting there! You are incredibly generous people and I would like to mention you here:

This is going to be a short little blog just to cover some of the more recent exciting events. As I write this there are only 4 more days until we all jet off to France which is beyond exciting. I cannot believe how quickly it has crept up!

Meeting everyone for the day in Wellington seems like eons ago but it was great to put names to faces and get to know everyone. I can’t wait to be spending a full two weeks with everyone; particularly due to the wonderful opportunities we...

Learn more about our day trip to the Somme

This video recaps what we did with our students in the Somme!

This day trip was the most important part of our partnership with New Zealand this year. The students finally realised the impact of WW1 even today.

They really enjoyed looking for the NZ soldiers' names and took their role very seriously. Many thanks to them....

For us it's the end of the school year now and other students will be involved in the project at the beginning of September.

See you soon on Shared...

Articles : school trip to the Somme

Here are copies of articles from the local newspaper about our school trip to the Somme and especially relevant places for New Zealand. 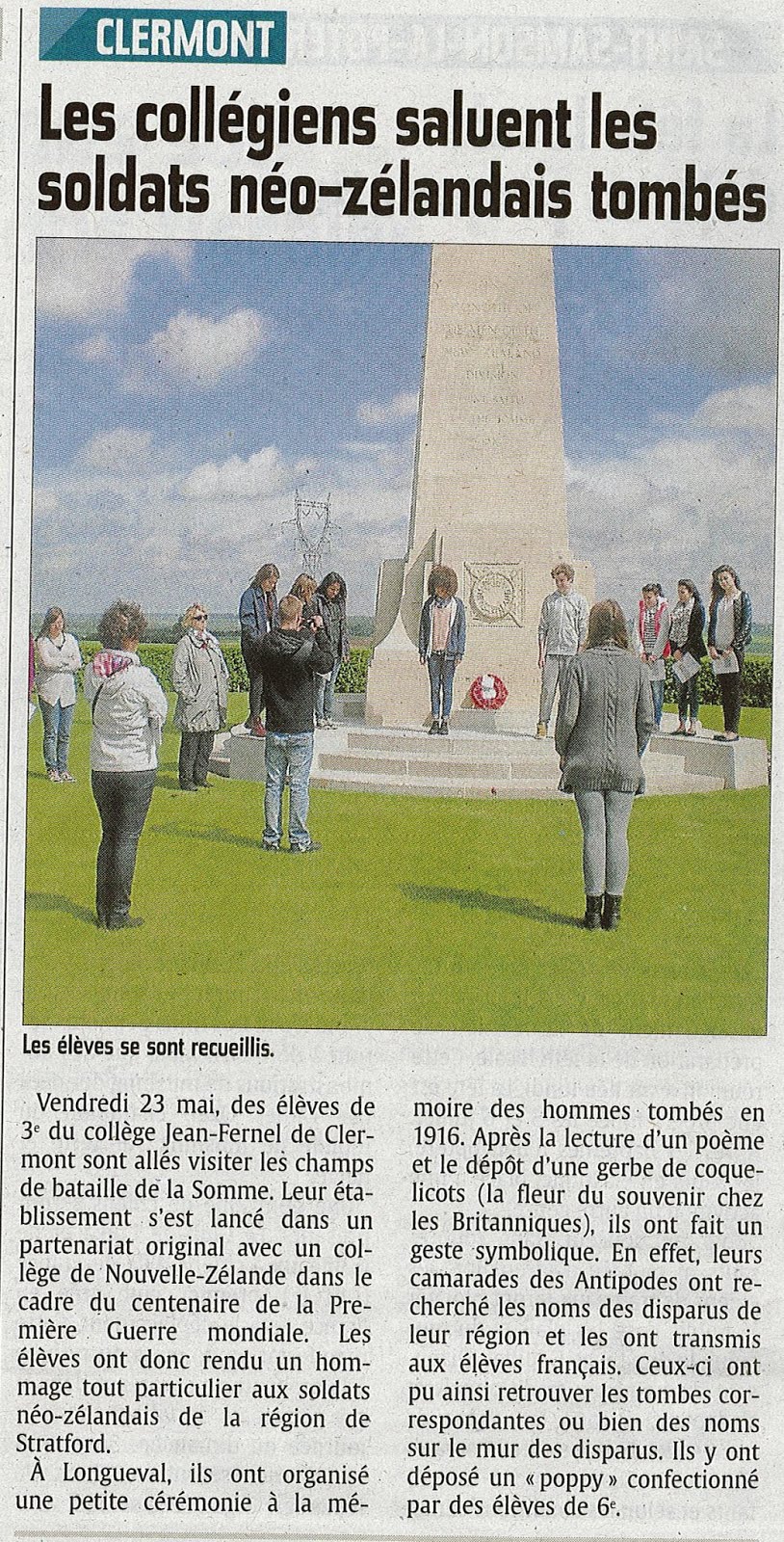 One article from the "Courrier picard" and a similar one from the "New Zealand Herald / Stratford Press".

It shows how important it is for the French and New Zealand local communities even if we are so distant !

The following members are online: